NUTRAGEO
Prevention of dermatitis and lameness

Nutrageo - Prevention of dermatitis and lameness

After having evolved for many years in the agricultural production sector, we have noticed that many farms were strongly impacted by digital dermatitis also called Mortellaro’s disease.

In addition, we were able to see that this pathology was fairly well cured, but only with products that were difficult to use.
Our efforts have focused on the creation of a natural, simple and effective product, which complements the diet of cattle and partly solves foot problems in dairy farms. 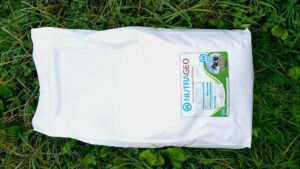 The financial impact of lameness is very significant in dairy farming

Of all the listed causes of lameness, dermatitis or digital dermatitis is the most significant. The Mortarello disease, named after the Professor who identified it in 1972, is the most common among existing forms of the disease. It is a highly contagious bacteria, and nearly impossible to eradicate. It is found worldwide, and causes mayhem in the operating losses for dairy production.

The causes of dermatitis are multiple :

Dermatitis affects more or less significantly approximately 80% of cattle rearing in France.
The rate of dermatitis on farms varies between 70% and 5% of the stock.
This percentage is constantly growing.

The product contains various ingredients, among which : 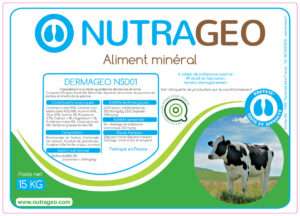 Clays have ancestral virtues, which have been recognised as a core component of animal food.
When grazing, cows can eat up to 14% of soils, and such a proportion of this essential  intake is not available when they are fed  in stables.

Thanks to its contents, clay is already used in breeding for the following inputs :

Biotin provides the animal with H et B8 vitamins.
Vitamin deficiencies in ruminants have been analysed for many years. It has been proven that the intake of Biotin solves issues specific to rearing:

These natural components enhance the efficiency of the product. They have a positive impact on the causes of cattle dermatitis, stress, immune defences deficit and spreading of the bacteria.

A herd of 55 dairy cows with significant dermatitis issues 40% of the herd infected After 3 months, only 5% infected
The outcome then remains sustained.

An independent  clinical assessment was carried out in 2013 by the Rhone-Alps Superior Agricultural and Agrifood Institute.

No footbaths
No restraints to hoof treatment 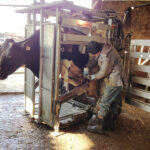 I started after a significant outburst of dermatitis in my herd before changing the building. Within two months of introducing the product, we noticed, together with our hoof trimmer, that the dermatitis was drying up. Today, as we use the product daily and ensure recurrent trimming, the rate of dermatitis has stabilised, now affecting less than 5% of the herd. The cost of the product is very low compared to the benefits it procures. Furthermore, as a precaution, we feed the product to cows and heifers in calving process
Thierry Bellouard – GAEC BELLOUARD, Maine-et-Loire
60 Prim Holstein dairy cows – Milking robot, mattress cubicle slope 7%, Production + 11.000 kg. Has been using the product for 2 years 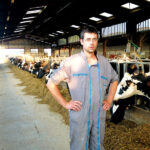 Our target was to reduce the issues of lameness mainly caused by dermatitis. They generated fairly significant direct and indirect costs for the farm, and we wanted to test by ourselves this innovative solution to assess its efficiency. After several months of use, I must admit that we are very satisfied with the results. Combining the product, regular hoof-trimming and a balanced diet has enabled us to reduce the numbers suffering from lameness. In addition, it is very easy to implement since it only means adding 25 g per day and per cow in the mixer
Thomas Bodin – GAEC DE CHAMPIGNY, Deux-Sèvres
90 Prim Holstein dairy cows – Milking parlour, straw-bedded cubicle, 9.500 kg. Has been using the product for 18 months

Other products that may interest you

EXRA IM, For a weell-start of young animals
NPP, To improve animal performance